A Story, A Moment, A Picture.

Its been a really long time since I wrote something.. I guess I lacked that push, I guess I was focussing on other things. But today, I got that push.

7:25PM, was just chilling in my room taking some classes on Natural Language Processing when I got a call “Macha, I’m in Bangalore, come lets shoot”

8:05PM, Brigade Road, I met Waseem. Its been a while since we met and shot together. He’s one of those people I really look up to simply because everytime we shoot together.. He inspires me to try new things and to think differently. Hell I still cant stand beside him and shoot properly, I’m so intimidated by him :) He’s really good.

So as we’re walking along the roads, looking for shots.. we bitch about those ‘wannabe’ photographers carrying around that hideous Canon EOS edge bag that they get for free. They really do not understand what photography is all about.. Maybe some of them do, but most of them don’t. And I will try to explain it today.

We walked and came across to this street, and it had this amazing old stone kinda building that hosted a fancy suit shop. We were trying our hand at some shots there when this kid came along. He was curious, and wanted to see what it is that we were doing. So Waseem immediately said “Macha, i’m shooting him” and that’s when it all started.

“John Peter”, a kid who earned Rs. 100 - Rs. 200 a day by collecting parking fare. He started telling us his story. He told us that his dad had passed away and that he gives all this money to his mom. We had some wonderful conversations with the kid. Well I was silent for most of it (im a useless introvert) but I was a part of all of it. Waseem then made him write his name on a piece of paper and hold it up for us to get shots.

Incident light from the left illuminating half his face, ISO at 1600, F 1.8, Shutter at 1/200th of a second. He, just standing there, composed, just posing for the 2nd time in his life. Last someone took a picture of him was 4 years ago when some white guy had visited it seems. I had got my shot. 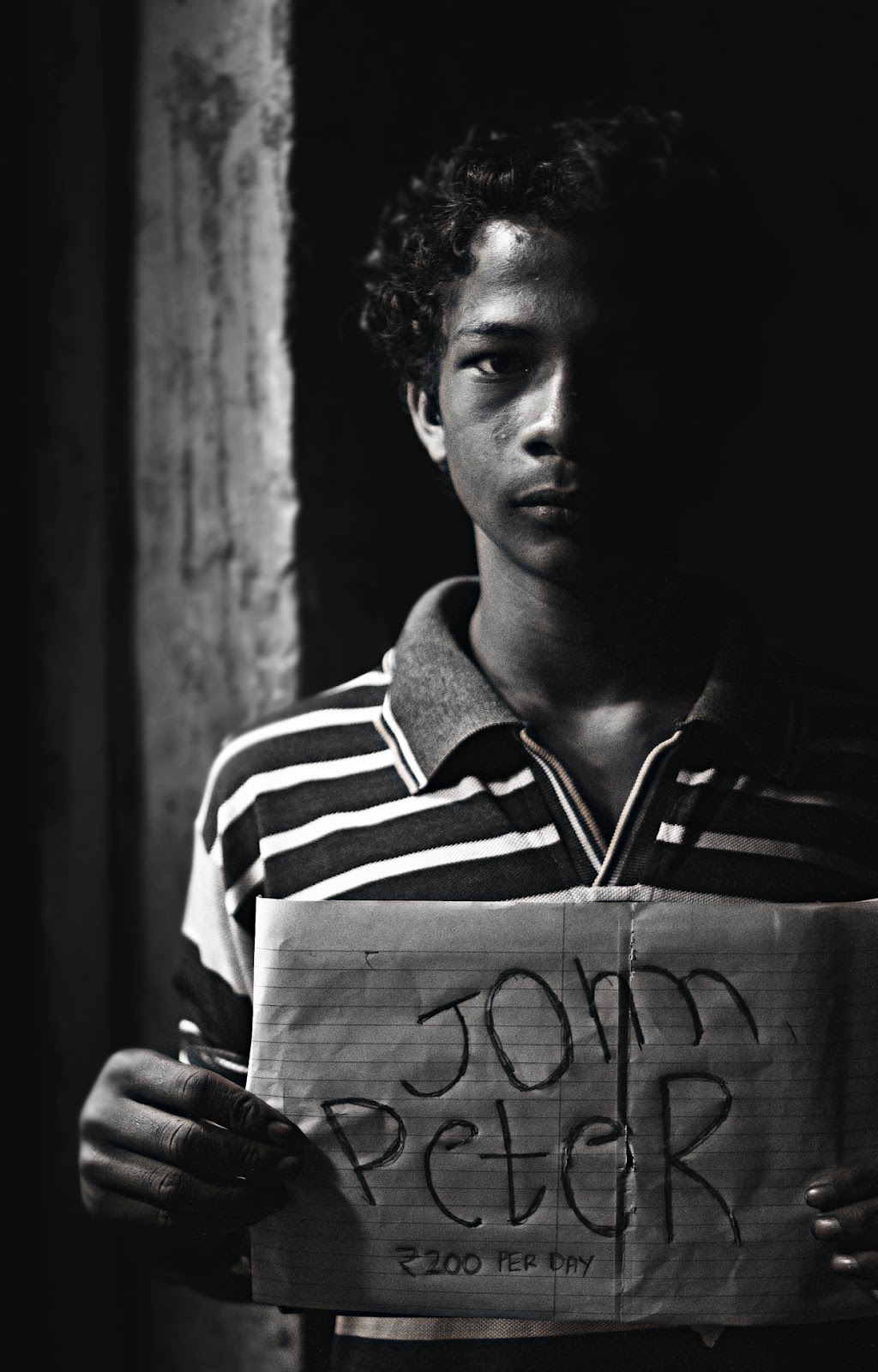 After every quick session, he asked us to show him what we had taken and always smiled at the shots.. We knew he liked them the instant we saw that smile.

Photographers these days, open up pages on facebook just as they know how to handle a camera and start putting up pictures.. I think this is really fucked up and that they really shouldn’t be doing so. Photography is something that takes YEARS to gain mastery over. More over its something that is SO highly subjective that one should understand his likes first before he can start publishing his work to the world.

It is about you, the moment and the story that revolves around it.

To me, Photography is my passion and today I rediscovered it. Its so wonderful when you’re standing there talking to a person who earns 100 bucks a day and gives it away to his mom. He studies whenever he can and managed to write his entire name in English. I think that standing there, listening to him narrate his story, itself, to me, was the perfect shot.

No light, No ISO, No Shutter speed, No Aperture. Just a story. That’s how I perceive photography.